A few days ago, Najib Balala threatened that ODM was going to reduce was going to introduce a debate on boundaries and reduce the Kikuyu in to a dually-landlocked country like Lesotho. Today, ODM legislators have said, “If there is any community in Kenya unwilling to co-exist with other Kenyans in a manner that reflects the popular will of Kenyans; then that community is at liberty to exercise the principle of self-determination as is well-enunciated in the U.N. Charter and other international legal instruments.”

The above statements are in line with ODM’s pre-election campaigns that portrayed the Kikuyu tribe as an impediment to equitable distribution of wealth and peace in Kenya. ODM successfully managed to reduce what is a class issue to a tribal issue. Surprisingly, those pushing ethnic discrimination and ethnic cleansing as a way of addressing equitable distribution of wealth are very wealthy. 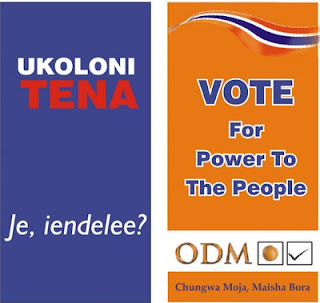 If you looked at the hotspots of ethnic violence in Kenya, you will notice that it is violence is concentrated in the slums where the poorest of the poor reside. Raila Odinga’s anti-Kikuyu campaign has pitted the members of the Luo community against the Kikyu community. The Lou are accusing the Kikuyu –who are equally poor- of dominating the economy. In this melee, Raila Odinga who is very wealth has found a way to effectively deflect attention of poor Kenyan workers from his wealth.

Those familiar with Kenya will agree with me that we have a few very rich Kenyans –drawn from different tribes and races- and a majority poor Kenyans. The notion that Kikuyus are wealthy while other Kenyans are poor is propaganda meant to justify ethnic cleansing.

Immediately after the 2007 elections, ODM started to spread propaganda that Kibaki managed to be elected by winning one province; Central Province. Offical results show that Kibaki and Kibaki won in 4 provinces each. Kibaki had Central, Eastern, North Eastern and Nairobi while Raila had Nyanza, Rift Valley, Western and Coast Provinces. Using ODM's data that puts Kibaki at 44% and Raila at 48%, it is still clear that Kibaki got more than the Kikuyu (22% of the population) vote. ODM's militia has been slaughtering the Kisii -who hail from Nyanza- accusing them of voting for Kibaki.

ODM legislators have doused fuel into the fire by suggesting that there is one community in Kenya (the Kikuyu) unwilling to co-exist with other Kenyans.

The last time I checked, Professor David Habel Odongo (a Luo) was happily living with his Kikuyu wife and running a successful hotel business in Kisumu until some goons from the Luo tribe attacked their business, looted it and razed it to the ground. The Last time I checked, Raila Odinga’s son Fidel Castro Odhiambo Odinga (a Luo) was married to Veronicah Wanjiru Ng’ang’a, a Kikuyu relative of Uhuru Kenyatta. Those are just but a few Luos and Kikuyus who share a bed.

In the slums, Mama Akinyi (a Luo) and Mama Kimani (a Kikuyu) borrowed sugar and salt from one another until Raila Odinga told them that they were enemies.

Raila Odinga is busy pushing the anti-Kikuyu campaign yet ODM has two Kikuyu MPs - Margaret Wanjiru and John Kiarie. There are several Kikuyu MPs elected on other party platforms. No Luo was elected on a PNU ticket (or any other party). Raphael Tuju (a Luo) who had brought a lot of development to his constituency was voted out because of eating with the enemy (the Kikuyu). Despite all that, Raila is calling for the isolation of the Kikuyu tribe into a Lesotho!

Raila Odinga’s case around the globe is being pushed by the Kenya Commission on Human Rights chief Maina Kiai (a Kikuyu). Maina Kiai has testimonies and interviews in major world capitals explaining why special seats should be created from Raila Odinga’s ODM while failing to use the mandate given by Kenyan commoners to push for the interests of Kenyans who have been evicted from their properties because of their tribe. Still Raila Odinga and ODM have the audacity to claim that the Kikuyus are unwilling to co-exist with other Kenyans.

The war cries that we hear today are no different to the anti-Tutsi propaganda that Rwanda was treated to. ODM’s propaganda that the Kikuyu are an impediment to peace in Kenya are akin to Kangura’s -a Hutu extremist newspaper- article titled “A cockroach cannot give birth to a butterfly.”


"We began by saying that a cockroach cannot give birth to a butterfly. It is true. A cockroach gives birth to another cockroach...The history of Rwanda shows us clearly that a Tutsi stays always exactly the same, that he has never changed. The malice, the evil are just as we knew them in the history of our country. We are not wrong in saying that a cockroach gives birth to another cockroach. Who could tell the difference between the Inyenzi who attacked in October 1990 and those of the 1960s. They are all linked...their evilness is the same. The unspeakable crimes of the Inyenzi of today...recall those of their elders: killing, pillaging, raping girls and women, etc,"

The Tutsi were cockroaches in Rwanda while the Kikuyu are Madoadoa (spots/stains) in Kenya that need to be cleansed. In Rwanda they had Radio Rwanda and Radio Télévision Libre des Mille Collines (RTLM); in Kenya we have Kass FM. In the run up to the elections, Kass FM and its listeners (predominantly Kalenjin) called on the people of milk (Kalenjin) to cut the grass that was growing too tall (Kikuyu). The station issued false warnings of impending attacks by “government sponsored” Mungiki. This should remind us of the false warnings that Radio Rwanda issued. In 1992 Radio Rwanda issued several false warnings that the Tutsi were going to attack the Hutu in the area of Bugesera citing information from a Nairobi based human rights group. The false alarm triggered the massacre of Tutsis.

Raila Odinga may be made the King of Kenya; his lieutenants may be appointed to the highest seats in the country; but that will not erase the perception that the Kikuyu are the main problem in Kenya. There will always be a reason to chop off a peasant Kikuyu’s head.

ODM’s tribal anti-Kikuyu rhetoric has been taken too far. When the world wakes up, it will be time reach into the garbage can and retrieve Bill Clinton’s speech in Rwanda where he said, “Genocide can occur anywhere. It is not an African phenomenon. We must have global vigilance. And never again must we be shy in the face of the evidence.”
Posted by Mkosa Kabila at 10:42 AM

REMOVE THE SPECK FROM OUR EYES FIRST BEFORE TRYING TO REMOVE THE LOG FROM OTHER PEOPLES EYES!!
TELL KIBAKI TO STOP THE KILLINGS BY THE POLICE!!SHOT TO KILL INNOCENT PEOPLE!!THAT IN ITSELF IS GENOCIDE USING KIKUYU POLICE TO KILL KENYANS-
TELL UHURU AND KIBAKI TO STOP MUNGIKI BEHEADING KENYANS AND THAT IS ALSO GENOCIDE- YOU ARE FOOLISH TO EXPECT KENYANS TO LIVE WITH FEAR OF BEING SLAUGHTERED BY TRIGGER HAPPY POLICE AND MUNGIKI GANG TERRORISTS!!THIS TIME KENYANS ARE PREPARED AND IT IS NOW OR NEVER- YOU EVEN MORE FOOLISH TO BLAME MAINA KIAI- WHO IS TRYING TO STOP MURDEROUS GANGS LIKE MUNGIKI- BUT THIS WILL BE DIFFICULT SINCE SOME OF THE PNU MEMBERS OF PARLIAMENT ARE MEMBERS OF TOP SEATS IN THE MUNGIKI SECT!!CULT- I FEEL SORRY FOR OUR CHILDREN AND THIER FUTURE !!IT IS NOT ABOUT KIBAKI AND RAILA IT IS ABOUT THE FUTURE OF OUR CHILDREN IN KENYA!!

ODM sympathizers amaze me. So all the kikuyus killed in the violence committed suicide? And the innocent killed by police, I guess the building in kisumu razed themselves down. Police are people too, but they have guns and when the going gets tough, they don't give a damn like the rioters. F.Y.I mungiki used to kill mostly kikuyus, and when the government acted, ODM (kalonzo and nyanga kubaff) wanted negotiation with the criminals. ODM did not come out strong in condemming the killings in rift valley until Mungikis started their own killings. Then they requested U.N troops, how hypocritical. ODM must realise that if they are to become leaders of Kenya, thay will lead a whole kenya, not the 41 tribes to one bshit they have been preaching about. B.T.W jk was not elected MP. Kenya does not belong to kikuyus, but kikuyus belong to kenya, just like the 41 or something so called tribes by Odinga (watch his bbc interview).

but foolish kikuyu's worship him blindly- i hope their own mungiki teaches them a lesson in beheading and yes circumcise all their mothers and daughters!!

Politic is so interesting theme, but let's discuss some chemical experiment, which you can complete in our own room. You must take sode and water, and than mix it. The reaction will be so funny and strange. If you will drink it, it will make your health more better.
https://tuko.co.ke/

- President Uhuru Kenyatta will host Achola Ngobi's relatives at his Gatundu home. Achola is the girl whom Uhuru's son Jomo married recently in a secret wedding. Just days after President Uhuru’s son Jomo married Achola Ngobi in a closely guarded wedding ceremony, another bash has been planned for the newlywed couple.
https://tuko.co.ke/220991-details-uhurus-bash-laws.html